Young people and their mental health – Is there a crisis? And is it the one we think it is? 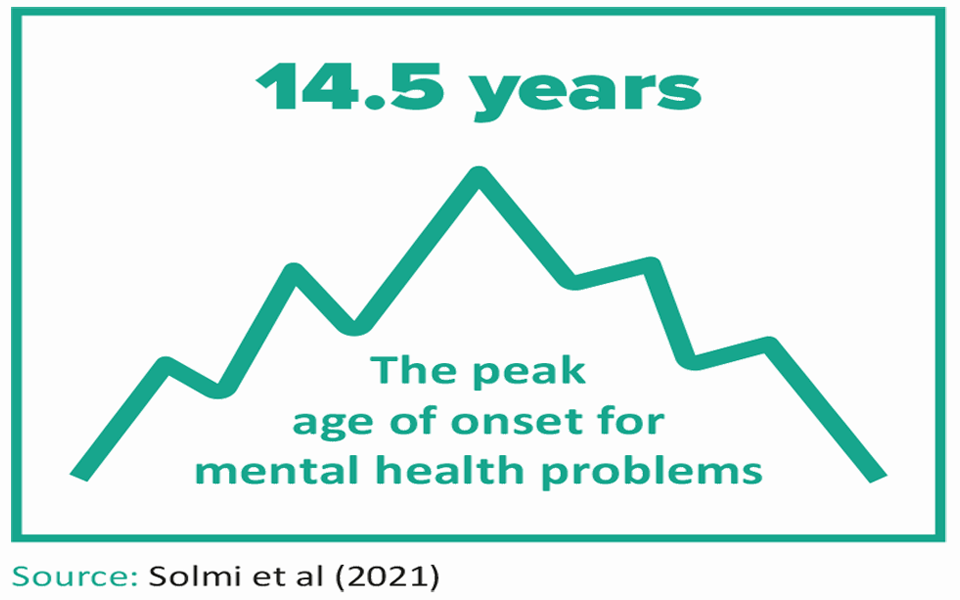 There has been much discussion about the increase in mental health problems in young people in recent years, both around the drivers and the consequences. In Key Data on Young People 2021, we have been looking at the available data on mental health in young people and asking questions about what they mean.  Lizzie Wortley, AYPH Research Associate

Exploring the patterning of disorders by gender

The data do suggest that mental health disorders are increasing in frequency in young people of all ages.  Repeated British Child and Adolescent Mental Health Surveys (B-CAMHS) from 1999 to 2017 1 have shown a steady rise in diagnosable conditions across both males and females in all age groups.  In 1999 13.1% of 11-15 year old boys had diagnosable levels of disorder, and 9.6% of females.  In 2004, this was 14.1% males and 10.6% females. By 2017* it was 14.2% males and 13% females.  Although the rise is reflected in both genders, it was more notable in girls.[1]

As well as the overall time trends, it seems something interesting is happening in terms of the data on gender and patterns of disorders.  In the 1999 and 2004 B-CAMHS surveys behavioural diagnoses far outnumbered emotional disorders in young people, with boys being the most likely to be diagnosed with these conditions. [2]

Currently the data look more mixed and confusing.  In the 2017 survey whilst males still dominate at the younger ages for conduct and behavioural disorder diagnoses, the major increase in mental health problems at secondary school age has been in anxiety and depression, known as emotional disorders, where females are still more likely to have diagnosable conditions than males (see chart 6.7 from Key Data for Young People 2021).[3]

What’s behind these gender patterns?

On a global scale, the role of gender in mental health diagnosis is not quite clear.  Is there a neurological difference, a social or cultural difference (both in upbringing, and in discussions around mental health that influences presentations), or are there emotional disorders being missed in males as they may present differently?

If gender is playing a role in diagnosis of problems, then is the suicide rate higher in males at that older age group because problems are not being picked up in their teenage years because they present differently?  Or is this a problem of trying to piece together the data from different surveys used for the younger and older age groups?  (Different surveys assess mental health status in under 16s and over 16s, and the data and disorders are presented differently, meaning you cannot follow group diagnoses across the age ranges).

It’s a confusing question that I can’t find easy answers to, or a clear understanding of. Others have raised the issue too. Simon Rice in Australia highlights the process of male mental health disorders and how they could be underdiagnosed, undermanaged and result in increased suicide rates.[4]

This all matters because, if we are missing some problems, then we need to be adapting our approach to boys and young men when we see them.  We might want to consider what we do when we see a young woman who appears sad and withdrawn, and ask whether there is a male equivalent that may have the same underlying diagnosis and need for support, but a different presentation?  We need to keep an open mind about these gender patterns showing in the data, and question whether we’re responding in the right way.

I hope that as services more specifically consider the needs of young people up to the age of 25 that this may be further reviewed it would seem the gender differences might be particularly salient in early adulthood.  Currently we know that only 19 in 1000 young people access CAMHS services in the community at any given time and only 25% of those using CAMHS services then transition to adult mental health services. This transfer to adult services and the risk of a lack of continuity might be coming at exactly the time that both young women AND young men need extra support. Other significant conditions where young people have to transition, such as epilepsy and renal transplant have shown a spike in mortality in the early twenties as care moves from child to adult services, indicating the complexity of a change in care for young people.  We need to ensure that our mental health services respond appropriately to need in this critical age group.

[3] There are data from 2020 and 2021 on rates of probable mental health disorders, but due to the pandemic – impacting on data collection methods – I have not used them for this piece